As one of today’s most important African –American collagists, Benny Andrews eloquently portrays the Black experience. In 1958, Mr. Andrews graduated from the Art Institute of Chicago. His illustrious career has included a directorship of the Visual Arts Program at the National Endownment of the Arts 1982-1984.  To date, he has had more than 60 solo exhibitions in numerous galleries and museums throughout the country and abroad, along with private and public collections.

The Metropolitan Museum of Art, the Museum of Modern of Art, the Brooklyn Museum, the Wadworth Atheneum, the Hirshorn Museum and Sculpture Garden in Washington, D.C. and rhe Studio Museum in Harlem are a few of the many places that Andrews has exhibited.

What is interesting about Andrews’ work is that he uses various objects and fabrics to add physical reality to the work, choosing materials that embody the status and occupation of his subjects.  Andrews’ early collages are intrinsically different from his later works which express a more fluid and linear figure.

Today, Andrews remains one of the premier Black artists of the United States.

Born in 1930, one of 10 children in a Georgia farming family, Benny Andrews grew up desperately poor. After serving in the U.S. Air Force, he studied at the Art Institute of Chicago on the G.I. Bill. He differed from his fellow students, mostly Abstract Expressionists, by going off to jazz clubs to draw. In 1958, he moved to New York, where his artist friends included Red Grooms, Bob Thompson and the Soyer brothers. For two years (1982-84), he served as director of the Visual Art Program for the National Endowment for the Arts, after which he returned to full-time painting.

Two kinds of influence coexist in Andrews's art. The first is an exuberant regionalism that takes into account the lives of the poor; Andrews sees a precedent in the work of Thomas Hart Benton. The second is the narrative impulse of much African-American painting, including that of outstanding modernists such as Romare Bearden and Jacob Lawrence, who invested their renderings of black life with dignity and pathos. It is possible to see Andrews as continuing to work in the vein of storytelling. However, his art is also about the ongoing project of exploring what it means to be American. Andrews, who sees himself as an inheritor of several cultures, has said, "It bothers me not being seen as a complicated individual. It's much easier [for people to typecast me] as regional or representational or Southern or black."

Andrews's paintings celebrate daily life. Among the 33 works, all dated 2002, in his ACA show was Living Room Dancing, in which a slender black man in a colorfully striped jacket dances to a tune on the radio. The scene is depicted in 1950s style. The dancer's delight is clearly communicated, and the painting's strong compositional balance pushes the work beyond appealing illustration. In his oil and collage paintings of art receptions, Andrews captures the talking heads engrossed in their exchange as they stand before the paintings. In Love offers a couple in wedding attire standing in front of several works of art; a wedding cake and bouquet of flowers are prominent. In a complex work titled Museum Maze, we see people gazing at a number of objects, an oversize sculpture of a general and an all-black abstract painting among them. There is the sense here that Andrews appreciates the way art can move people, the way it can convey the experiences and dignity of ordinary life. 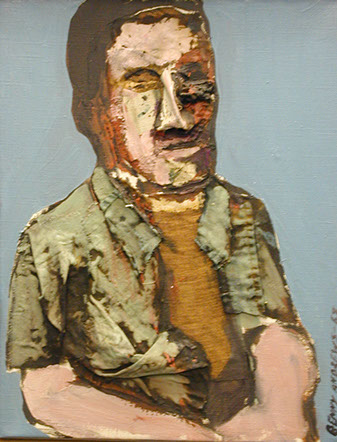