John Wesley Hardrick was born in Indianapolis, Indiana, where he spent his entire career.  He studied at the John Herron Art Institute under the Hoosier Group artists under such artists as William Forsyth and Otto Stark.  Aside from the influence of the Hoosier impressionists, Hardrick was inspired by Auguste Renoir’s placement of women among flowers and leaves, by Vincent van Gogh’s and Paul Gauguin’s expressive use of color.  He also admired Van Gogh’s bold impasto.

Like many other black artists beginning their careers during the early 1920’s, Hardrick was forced to work as a manual laborer to support his interest in art.  To support his art and his family, Hardrick worked at the Indianapolis Stove Foundry and even drove a cab at night.  His first important recognition came when he won the Harmon bronze medal in fine arts for 1927. Several years later, he won a prize for outstanding work in the Indiana State Exhibition of 1933. Hardrick went on to exhibit at the Smithsonian Institution, the Chicago Art Institute, the American Negro Exposition, the Indianapolis Museum of Art, and other museums throughout the country.

Although he exhibited frequently with the Harmon Foundation, Hardrick’s work received little attention during his lifetime.  He painted various subjects, but became best known for his portraits and figurative works.  He also painted murals for churches and schools.  Although he considered himself a portrait artist, Hardrick was also a master landscape artist.

After the 1940’s, the bulk of Hardricks work consisted of landscapes.  Hardrick’ s landscapes were derived from his trips to the countryside of Brook County, Indiana.  He traveled there often usually during the peak of each season  to see nature at its extremes. He would observe the leaves at their richest color in autumn, the sun at its brightest in the summer, and the snow-covered ground in the winter.  Hardrick would not paint nor sketch there; instead, he would memorize the scenes.  From his recollections and imagination, Hardrick would paint sensuous landscapes using rich colors and thick impasto.  In these landscapes, we see the Impressionist and Van Gogh’s influence.

That Hardrick, without leaving Indiana, earned strong recognition in his lifetime is evident in the fact that he was asked to supply information for E. Benezit’s Dictionnaire critique et documentaire des peintres, scuipteurs, dessinateurs and graveurs, an international dictionary of artists.

Hardrick continued to work until he developed Parkinson’s disease and could no longer paint.  He died in 1968. 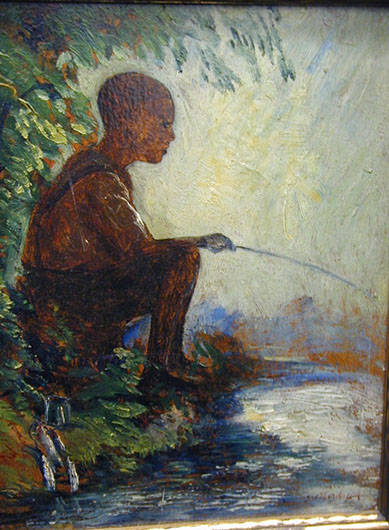